anyway, it's that time again, spring and ... movies!

Tribeca Film Festival is upon us again, and once more I have emptied my wallet and filled my calendar with strange and unknown things to see. I'll try to make a few notes along the way and let y'all know what's interesting. 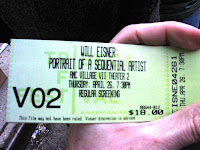 The first film I saw was the world premiere of "WILL EISNER: PORTRAIT OF A SEQUENTIAL ARTIST", which was a decent doc about a fantastic subject. Eisner more or less invented what's known today as the graphic novel; that is to say using the form of a comic book but addressing themes which would not appeal to a typical 12 year old boy. Like most art, the history of it is way more complicated than you realize; apparently the comic books went through something extremely similar to the movies where without regulation of any sort they became extremely sexy and violent, and then someone came along and blamed all of America's ills on the comics. So like the Pre-Code films of the 30s, the violent comics were the subject of a congressional inquiry (enquiry?) and the industry ended up instituting a 'self-imposed' code to keep comics safe for kiddies, and boring.

Eisner was instrumental in breaking that model, first through a periodical he published called "The Spirit", and later through a series of one–off graphic novels he did addressing a variety of philosophical issues. He also wrote a couple of manuals for comic artists, and perhaps most amazingly, displayed a sound business sense his entire life, which enabled him to be a productive artist over an astonishingly long range of time and in a huge variety of circumstances.

The film also touched on how so many of the great american comic icons were created by Jews from the ghettos of New York, and the complicated relationship these artists had with Judiasm.

Overall, I really liked this film; the interviews were well done and varied, and the filmmakers had clearly tried very hard to make space for the artwork to show through. WILL EISNER: PORTRAIT OF A SEQUENTIAL ARTIST" is screening a number of times during the festival, and I'd highly recommend checking it out.
Posted by synchro at 12:57 PM